“Get Britain on its bike”- part 1: cycle-paths

“Cycling is a top priority in Prime Minister’s drive to tackle obesity in fight against Covid-19 in the UK.” So said Cyclist magazine on 15 May 2020, adding that “Boris Johnson believes that the coronavirus crisis presents the perfect opportunity to ‘get Britain on its bike’ to enable social distancing and tackle the high level of obesity that increases risks for those who catch Covid-19.”

Stop Press: In their meeting before the start of the G7 Summit, President Biden gave Johnson a US-made bike: “The White House says Biden gave Johnson ‘an American-made bicycle and bike helmet custom-made by Bilenky Cycle Works, a small family business located in Philadelphia’. Biden was born in Pennsylvania.” So, bikes and cycling are very much to the fore in the UK-US “Indestructible” special relationship! Of course, the relevance of this gift will not be lost in the context of climate change being a key topic at the G7 Summit and the 2021 United Nations Climate Change Conference scheduled to be held in Glasgow in November!

Back to Boris: I’m not really sure what has been achieved since last year. I suspect very little, as with so many Johnsonian promises, but as a ‘serious recreational cyclist’ I applaud the sentiment.

Where I certainly agree with Johnson (and that’s unusual!) is that cycling has been an ideal form of permitted exercise during lockdowns. Cycling has enabled my wife and me to maintain ‘social distancing’ even on local paths and lanes popular with walkers. Unfortunately, many local walkers have not been good at social distancing or at wearing facemasks. In fact, it was such a problem that we didn’t feel safe going for walks around where we live, even when my wife (who is at high risk with immunity issues, but needs to exercise to maintain her fitness) bought a bright yellow tabard asking people to give her space!

One year on, it is appropriate to review the situation in the UK: specifically, a survey of what might encourage people to take up cycling, and what support and infrastructure exist to foster cycling … and what might put potential cyclists off! ‘Cyclist’ is a very broad term, ranging from those using two wheels to commute to work or to travel from a to b, through leisure cyclists and touring cyclists to serious club and competition cyclists.

Some will be perfectly happy to share their space with motor traffic, either in towns and cities or on the open road. Others, mostly leisure or recreational cyclists, shun main roads and stick to country lanes, or dedicated cycle routes (where they exist!). Our focus here is on routes designed and constructed with cyclists in mind – do they encourage the use of pedal power? If so, cycling shows promise as the ideal form of transport for work and leisure!

Cycling along busy roads is challenging enough in town, but on the open road vehicles may be travelling at 60 miles per hour or more, and they don’t always pass cyclists leaving adequate distance between two wheels and four. What is worse, the motorist won’t see the pothole or gravel or rough road edge around which the cyclist needs to swerve to avoid. My ‘cyclist’ son-in-law, who for many years has earned a living through cycling or work closely connected with cycling, says that the answer is to “make yourself wide!” to make sure you give yourself enough space! That demands a certain level of confidence – and competence. Even so, like many cyclists no doubt, we avoid cycling on main roads unless we have no choice.

The nature of urban cycle routes available to cycle-commuters is very varied: in many cases cycle routes consist simply of paint markings segregating bikes from motor traffic where possible, but not at junctions and traffic lights. This is not ideal. In many places – and Torquay would be a good example – a line of paint designates a narrow strip of road between the kerb and the cars, offering the cyclist little space and ample opportunity to breathe in traffic fumes. We tried cycling across Torquay following the bike signs, sometimes on shared pavements, but all too often on a very narrow strip at the side of busy roads. It was not an experience we would want to repeat in a hurry!

By contrast, Exeter has many dedicated routes away from road traffic, and a striking feature of the city is the number of people travelling to work on two wheels. But then Exeter has a pretty enlightened approach to transport generally, and is still planning improvements to encourage cycling.

A few years ago, I used to travel through Leeds regularly by train: I was always impressed to see how many cycle routes could be seen from the train, away from traffic and the consequent pollution, and well used for commuting: undoubtedly each bike meant one fewer car, and a corresponding reduction in air pollution.

It is interesting that the Department for Transport guidance on cycle infrastructure design states: ”Cycle infrastructure should be accessible to everyone from 8 to 80 and beyond: it should be planned and designed for everyone. The opportunity to cycle in our towns and cities should be universal.” Among the ‘don’ts’ listed: “Space for cycling is important but a narrow advisory cycle lane next to a narrow general traffic lane … is not an acceptable offer for cyclists.”

Far safer and more confidence-inspiring are cycle routes away from motor traffic. Such routes may use existing paths, such as along canals or rivers, or may be purpose-built. They are popular precisely because they are safe and convenient, constructed with cyclists in mind. The Department for Transport guidance states as a ‘do’: “Not only must cycle infrastructure be safe, it should also be perceived to be safe so that more people feel able to cycle.”

Country routes in some places are also used for commuting between towns and villages, but of course they are also popular with leisure cyclists. For example, the Exe Trail, a fantastic and scenic dedicated cycle route along the Exe Estuary to Starcross and beyond on one bank, and to Exmouth on the other. We really enjoyed cycling the former recently. It is totally secure for cyclists, crossing just one main road via a dedicated traffic light system, and using a quiet lane for a short distance at Starcross.

Another excellent route in South Devon runs from near Stover Country Park, where there is ample parking for cyclists taking their bikes there by car. The Stover Trail is well-marked, running in one direction south-eastwards past the bottom end of the Haytor Granite Tramway, alongside the derelict Stover Canal, and through Newton Abbot (where the route passes along footpaths at the side of the road and across pedestrian/cyclist crossings), down to the Teign Estuary.

In the other direction, north-westwards, the Stover Trail goes to Bovey Tracey, following a minor road into the town; from there one can cycle through a park to join the recently completed Wray Valley Trail. This mostly follows a disused rail route to Moretonhampstead, just diverting along a country lane for a mile or two through the pretty village of Lustleigh, before returning to the route of the former railway. Of course, cycling along former rail routes means gentle gradients, and in this case cycling from Moretonhampstead back to Bovey Tracey means a very gentle downhill slope requiring very little pedalling for several miles!

The West Kernow Way
Very recently a new circular cycle route was inaugurated in Cornwall: the West Kernow Way, which starts and ends in Penzance and is very much geared towards tourists. In the words of The Guardian, “The charity Cycling UK has been working for more than a year on developing the project, plotting a route using bridleways, byways and quiet stretches of country road.” This route for cycle-tourists takes four days to complete: the route takes in several tourist attractions, such as Land’s End, The Lizard, St Michaels Mount, the Minack Theatre and several tin mines. Parts of it will undoubtedly be popular with leisure cyclists aiming to cover shorter distances.

So, the West Country has quite a lot to offer cyclists of all sorts … if they feel fit enough and confident enough to get around on two wheels! In Part Two, we’ll look again at former rail routes, cycling abroad, and the solution for older and less athletic cyclists: E-asy cycling! 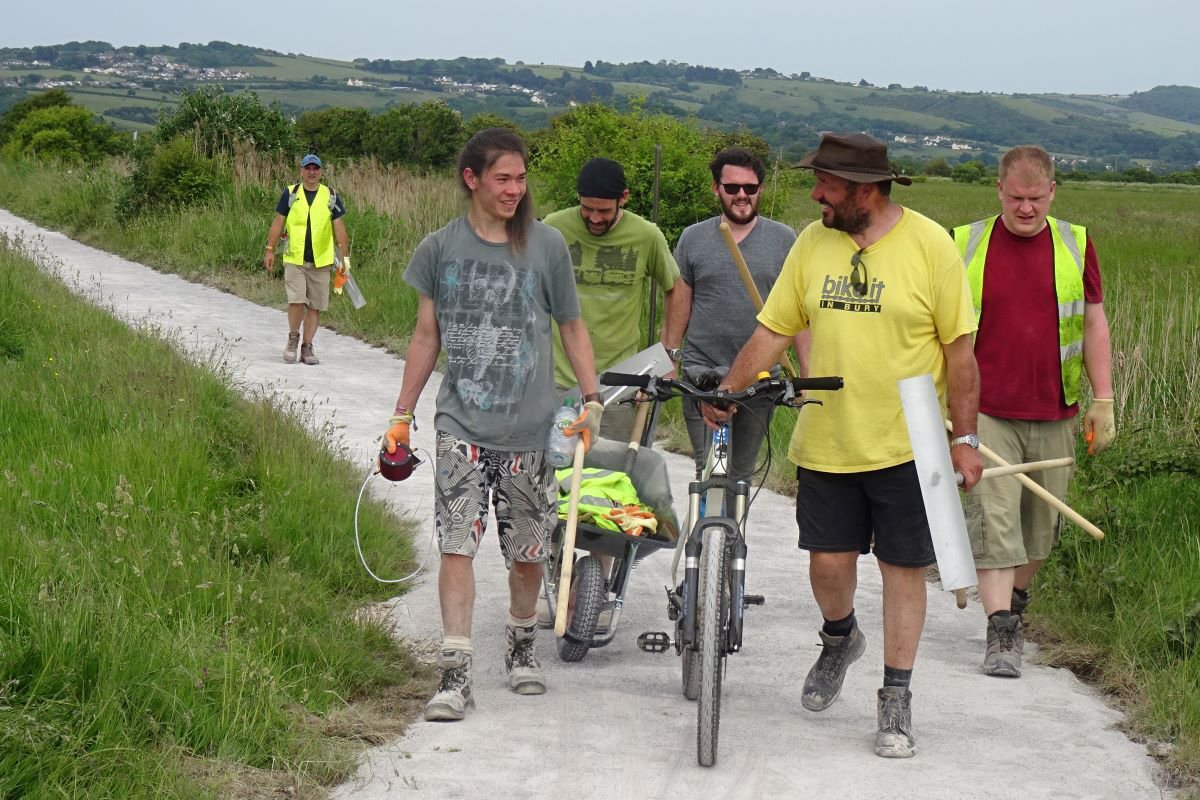